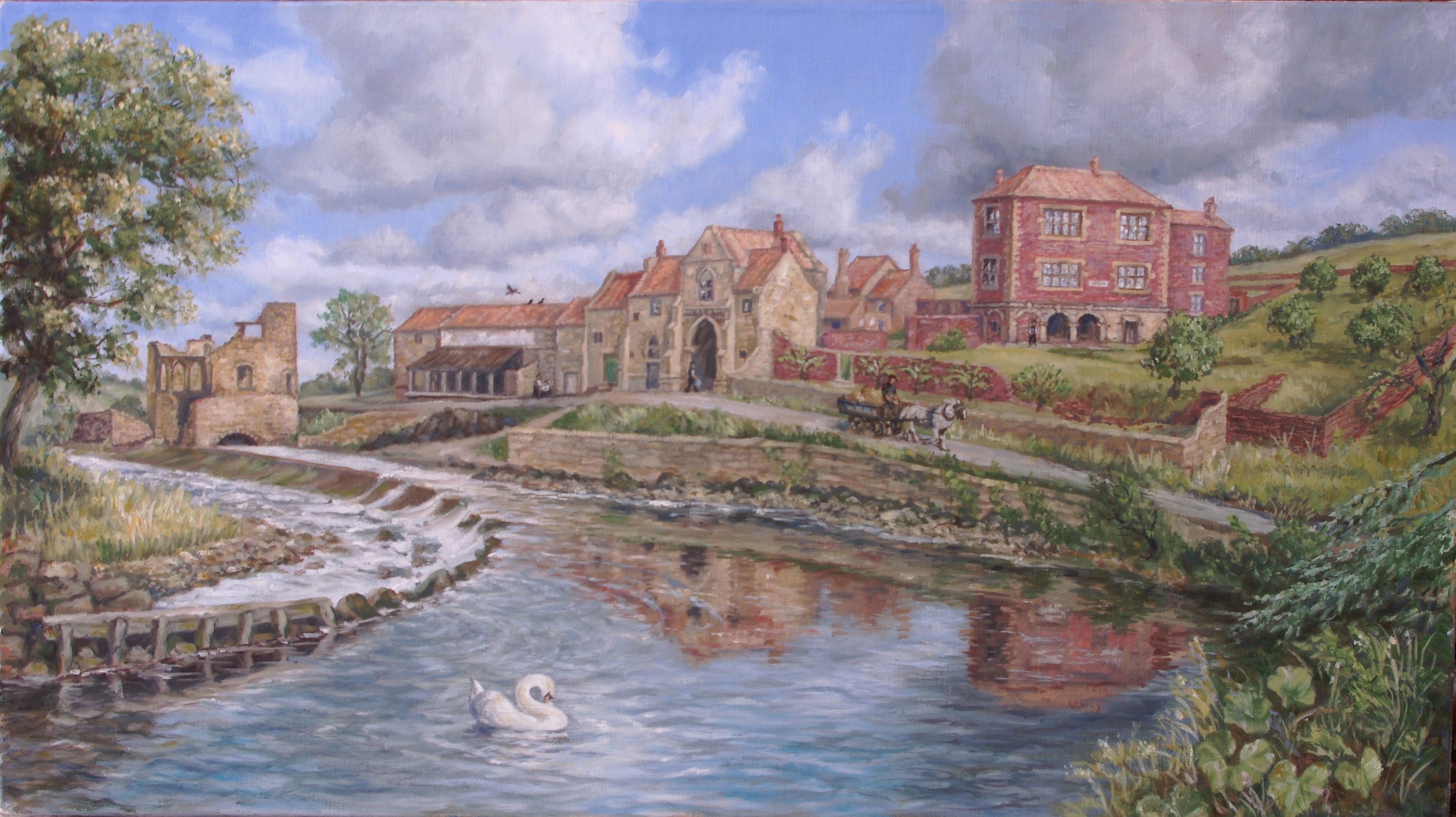 This painting is based closely on two photographs taken of Kepier in the 1880s. In the centre is the gatehouse of the otherwise demolished mediaeval Kepier Hospital, with a barn and lean-to cow shed to the north. Almost hidden by a tree is the farmhouse. To the south east, at the right of the photograph, is the White Bear Inn. This had been built in Elizabethan times as a gentleman's mansion by John Heath, but became a venue for public refreshment with pleasure garden in Victorian times. When business fell away after the mill ceased to be a destination for carters, the inn fell into disrepair and was demolished in 1892. To the left of the photograph is the ruined mill. This has gone too, perhaps stripped and recycled for building material at the same time as the inn was being demolished. The remains of the weir at the front left in the photograph have also disappeared. Today, therefore, more or less all that remains are a few stones around the silted up mill arch, and that is usually concealed in bushes and the invasive Himalayan balsam weeds which have taken over the river banks. Even this view is no longer, as the river bank is today heavily overhung by obscuring trees.

I took photographs of this painting as I worked on it. The series below shows how it developed. I first roughly painted a sketch on a full sized piece of paper using acryllic paint, then blocked in the whole picture on the canvas in oils. It is usually sensible to start at the top with the background and work down the canvas and out to the foreground. That is why I started with the sky, then the buildings, the tree on the left, the river, the right river bank, and finally the swan and horse and cart. You may notice that I changed my mind about the construction of the mill, changing brick to stone at the last stage.

I have to agree with people who see a freshness and togetherness in the first sketch which is absent in the final painting. Modern taste is for impression and leaving much to the imagination, and indeed the same is said about John Constable's preliminary sketches. However, my aim was an historical reconstruction, for which detail is necessary. Bear in mind that the colours on screen will depend on your display settings and so are only an approximatin to the actual painting. I describe my research into the ruined water mill in another page on this web iste.